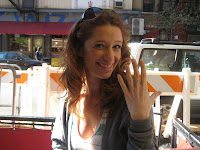 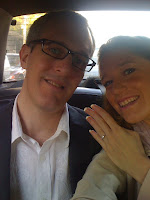 James and I met 4 years ago this past August and quickly became best friends.  After 6 months of just being friends, I started to realize the search for Mr. Right and my soul mate could actually be found in the person I relied on and confided in.  When we were together, there was never an awkward moment and it just seemed so right.  I moved in 5 months later to his 200 sq ft studio apt. Two months after that, James casually said to me in the back of a cab ride home that he would marry me some day.  We moved into a bigger apartment and started planning to get married that year.  Then the recession hit.  James lost his job and was out of work for just over a year and a half.  We had to give up our first apartment together, move back into the building with the studio apartment and sadly put off the wedding.  But through all the trials and tribulations, we never lost sight fact that as long as we had one another, we would overcome anything, and our perfect wedding would come someday.  Through those tough times, we found strength and comfort in each other and our relationship grew stronger. Finally, after 3 years, he officially popped the question.  Truth is we had picked out the ring a few months before after saving a little here and a little there for years, but he kept it tucked away in an old pair of shoes so I would be surprised when he formally asked…and I was.  It was a bright October morning where we planned to have a photographer take our first set of photos as a couple, James spun me around, dropped to one knee, told me how happy he was to have found his soul mate in his best friend, and asked me to marry him.  The moment may not have been the most elaborate or romantic to some, but it was the perfect proposal for us.  As we dropped to the ground both smiling from ear to ear, we realized we were now running late for what ultimately became our engagement photos. What’s great is that the pictures captured all the excitement we felt that day and you can literally see us glowing with love.  Now that I look back, it was the most perfect engagement and our engagement pictures capture it all!

Would you like an email every time I blog? Come on! I know you do!

What song should we dance our first dance to?