Because every great love story needs a theme song...
James and I met through mutual friends in the summer of 2007.  We hit off from the beginning, but as friends.  We became friends fast, and our Sundays were spent with friends and fun.  That December, our feelings became more and while we tried to decided what exactly we were we hid our relationship from our group of friends.  We were working together which made it even more challenging and scandalous.  Soon, our feelings became serious and we moved into together which our secret soon came out.


My love-James grew up in Dallas, Texas.  He graduated from Texas Tech as a Journalism Major.  He began working in Advertising and worked some very impressive brand names.  While in New York, he met his now best friends and grew up with them.  He has lived in the East Village for over ten years now and he calls it home.  Paul and he opened up a club, Sol and ran it successfully for three years until the recession hit.  The next opportunity is in the works for them while James is working at a restaurant downtown.


Me- I'm quirky.  I'm a romantic.  I have gone to bed dreaming of my wedding for the majority of the adult life while looking hunting for my dream man.  I grew up in Bridgeport, West Virgina and moved to Fla when I was 17.  I studied nursing at BCC and FAU, but I knocked myself off my success track close to the end because of my father's death.  Nursing is my dream job (specifically in the hospice field), and now I am back in school pursuing my nursing ( again...all over again..kids don't let your credits expire) and ultimately my Nurse Practitioner degree or Physician Assistant degree.  Right now, I am working as a practice manager for a plastic surgeon while studying at Penn State.


Both of us are full of dreams of successful careers with children and marriage in our near future.  One thing, we agree on is we can do anything together!!  And our struggles as a couple have brought us closer together as a team. 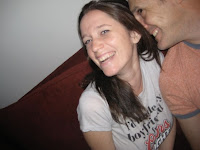 Would you like an email every time I blog? Come on! I know you do!

What song should we dance our first dance to?